On 27 October 1972, Robert Wyler - at that time departmental manager of special collections at the Swiss National Library - wrote in a report: "The Swiss National Library heartily welcomes all efforts which lead to the establishment of a Swiss sound archives. At the moment, it has neither the personnel nor the premises to be able to carry out such a task on its own."

Robert Wyler belongs to a small circle of individuals who have tirelessly done their best during more than a decade for the creation of a Swiss National Sound Archives.

It is also interesting that in his text there are deficiencies mentioned, which still exist today. For instance, there is talk about the insufficient availability of radio recordings as well as the lack of means at the Swiss Folk Song Archives and at the University of Zurich Phonogram Archives, in order to "take care of, evaluate and expand the collected material … to the desired extent". The report was in 1973 the basis for petitions to the Executive Federal Council and the Swiss Science Council, in which the establishment of a national sound archives was recommended.

In addition to Robert Wyler, Hans-Rudolf Dürrenmatt - at that time music department manager of the Solothurn Central Library - also made an effort for the sound archives. In the 1970's, both were members of the Sound Archives Commission of the VSB (Association of Swiss Librarians; today BBS) and SVD (Swiss Association for Documentation). The following is in a memorandum from 2 June 1976: "Two commission members - Messrs. Dürrenmatt and Wyler - are in a working group convened by the Swiss National Committee of the AIBM (Association Internationale des Bibliothèques Musicales; today ASCM), which aims to establish a national sound archives. With financial support from Pro Helvetia it will soon be possible to prepare a study on the fundamental requirements of such an institution. The Clottu Expert Commission explicitly mentions the project regarding a Swiss National Archives in its reports, and recommends it for realisation."

The so-called "Clottu Report" (Eléments pour une politique culturelle suisse) from 1975 was one of the few official documents in which the sound archives were mentioned. Two other protagonists of the sound archives history were behind this: Franz Georg Maier, Director of the National Library, and Hans Steinbeck, Director of the Swiss Music Archives at SUISA [Swiss Royalty Collection Society]. In April and May 1974 there was an exchange of letters between National Assembly Councillor Gaston Clottu, Steinbeck and Maier, in which the section concerning the sound archives was drafted in the Clottu Report.

The aforementioned study by Hans-Rudolf Dürrenmatt came about in the months August to October 1976, and shows an astounding wealth of details despite the short period of origin. Whereas Maier - on behalf of the National Library - submitted a positive opinion on the study in August 1977, the Swiss Department of the Interior (EDI) took more time. In a letter to Hans Steinbeck from 26 May 1978, the then department director, Hans Hürlimann, communicated that "the creation of a sound archives complies with a politico-cultural need; however, the realization of the project in the proposed sense is not possible at the moment, simply due to the absolute personnel stops ordered by parliament as well as the lack of premises." A sponsorship by the Canton and City of Bern is considered as an alternative to integration into the National Library; the attitude of the SRG [Swiss Broadcasting Corporation] vis-à-vis the project is also "decisive for the realization".

At a meeting of the interested group on 15 November 1978, the Confederation's reticence was confirmed, and the possibilities of an accommodation of the National Sound Archives in Bern under the involvement of the city and the canton were discussed.

On 3 July 1980, a prominently staffed working group of the "Bundesamt für Kulturpflege" (today's "Bundesamt für Kultur"["Federal Cultural Office"]) under the direction of Christoph Reichenau published an extensive report entitled "Swiss National Sound Archives Project". Amongst other things, it contained a draft for a deed of foundation. The Swiss Confederation, the Canton Bern, SUISA, the Swiss Performer's Society (SIG), IFPI Switzerland and SRG were named as supporting agencies.

On 30 October 1981, the EDI proposed the creation of a Swiss National Sound Archives to the Executive Federal Council; but the motion was withdrawn due to the insurmountable opposition of the Finance Department. Whereupon F.G. Maier and Frédéric Dubois (Director of the Bundesamt für Kulturpflege) advocated the granting of an investment contribution from the minting profit of the "Treaty of Stans Commemorative Taler", as well as the approval for hiring a trainee and the reservation of a solicitously furnished room in the Swiss National Library for 2-3 years. The Executive Federal Council approved a contribution of 120,000 Swiss francs in July 1982. In a discussion paper for the Executive Federal Council from September 1983, it is recorded that in December 1982 the City of Lugano agreed to make the former radio studio available. And with that events came closer to the point of realization.

The "Swiss National Sound Archives Establishment Association" was established on 14 February 1984. The statutes mention "… establishing a Swiss National Sound Archives, and subsequently entrusting this, on behalf of the Swiss Confederation, for continuation as part of the Swiss National Library" as the association's purpose. Hans Rudolf Dörig, at that time Vice-Director of the Bundesamt für Kulturpflege, was elected as president. Hans Georg Maier (Director of the National Library), André Guex-Joris (city archivist from Morges and record collector), Emmanuel Belser (SRG) and Hans Steinbeck (SUISA, Swiss Music Archives) were also members of the executive board.

On 22 March 1984, i.e. after the establishment of the association, Frédéric Dubois once again informed National Assembly Councillor Egli about the development of the situation. Egli responded very indignantly, since the national sound archives project had not been adopted in the legislative planning beforehand, and two of his chief officials - H.R. Dörig and F.G. Maier - had made themselves available as personal members of the association. He emphazised that the Executive Federal Council had been faced with a "fait accompli" as a result.

The sound archives come into being

The real existence of the Swiss National Sound Archives began on a late-summer day - 17 August 1984 - in Morges with the first general assembly of the establishment association. The executive board was complemented by Armando Zoppi (Lugano communal secretary) and Vital Hauser (SIG director) at this assembly. In addition, an advisory board - with Jacques Goy (sound technician at Radio Suisse Romande), Clau Solèr (from the University of Zurich Phonogram Archives), Ticino composer Carlo Florindo Semini (who had advocated accommodation of the sound archives in Ticino) as well as Robert Wyler and Hans-Rudolf Dürrenmatt - was appointed. Kurt Deggeller was ultimately elected as director.

At that time, the financial basis of the enterprise consisted of two one-time contributions: 120,000 francs from the Confederation's minting profit and 100,000 francs from SUISA. Financial assistance from the Confederation was not to be expected before 1988, the beginning of a new financial planning period. The City of Lugano provided free premises in the former radio studio, and had approved a credit of 112,000 francs for their conversion. The amount was later increased to 163,000 francs, since the floor of the archivse room had to be reinforced. The conversion was concluded in the autumn of 1985 and inaugurated on 30 October with a small ceremony, at which - in addition to president Dörig and the director - the vice-mayor of Lugano, Benedetto Bonaglia, also spoke.

On the political level, the then Ticino National Assembly Councillor Mario Grassi had submitted a postulate, with which the Executive Federal Council was invited to examine in which form the Swiss National Sound Archives could be adequately supported. The postulate was accepted in February 1986 by the Executive Federal Council and adopted by the National Assembly in the spring session. In addition, a meeting was held with the Ticino Canton Cultural Commission, with the result that the canton approved a one-time starting-up aid of 100,000 francs for 1987 and a regular operational contribution of 50,000 francs starting in 1988. At the second general assembly on 8 March 1985 in the National Library in Bern, the president, Hans Rudolf Dörig, was also able to hold out the prospect of annual support through the Confederation (400,000 francs) starting in 1988. The executive board was complemented by Jürg Rohrdorf, Director of IFPI Switzerland.

With these commitments it was necessary to take the responsibility to hire two part-time employees in February 1986: Mrs. Ombretta Fontana (documentation) and Stefano Cavaglieri (technology). They have remained faithful to the sound archives, and have also contributed in the most meritorious manner to the build-up and operation of the institute.

The participation in the National Research Programme 16 "Methods for Preservation of Cultural Assets" was a substantial help during the financial bridging of the years 1986 and 1987. The project entitled "Historic Sound Documents of Switzerland: Information, Documentation, Restoration" - which ran from January 1986 to December 1987, and was endowed with 200,000 francs - allowed the build-up of proficiencies in the technical and documentary realm. The highlight was an international colloquium on the theme "History, Preservation and Restoration of Historic Sound Storage Medium", which was held from 28 to 30 October 1986 in Lugano - and at which, amongst others, Marie-France Calas (the then Directors of the French Phonothèque Nationale), and Dietrich Schüller (Director of the Phonogram Archives of the Austrian Academy of Sciences) also took part.

In June 1986, the executive board decided to convert the association into a foundation. The establishment of the foundation took place on the occasion of the session from 18 May 1987 in Lugano with the adoption of the memorandum of association and with the notarial authentication of 24 November 1987. The Confederation did not act as founder, but received a seat in the Foundation Council. In addition to the Canton Ticino and the City of Lugano, the SRG as well as the royalty collection societies SUISA, SIG and IFPI also joined the foundation. It was endowed with a capital of 5,000 francs. Giancarlo Viscardi (member of the Lugano municipal government) was elected as the first president of the Foundation Council.

The first Board of Trustees 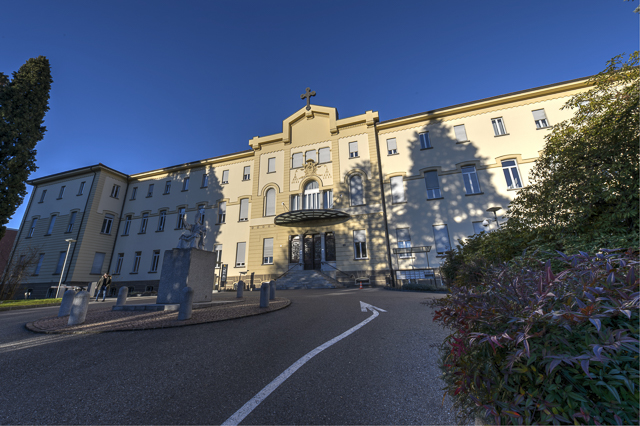